Three Octaves Metric Key of the Collemaggio’s Labyrinth29 June 2018Next 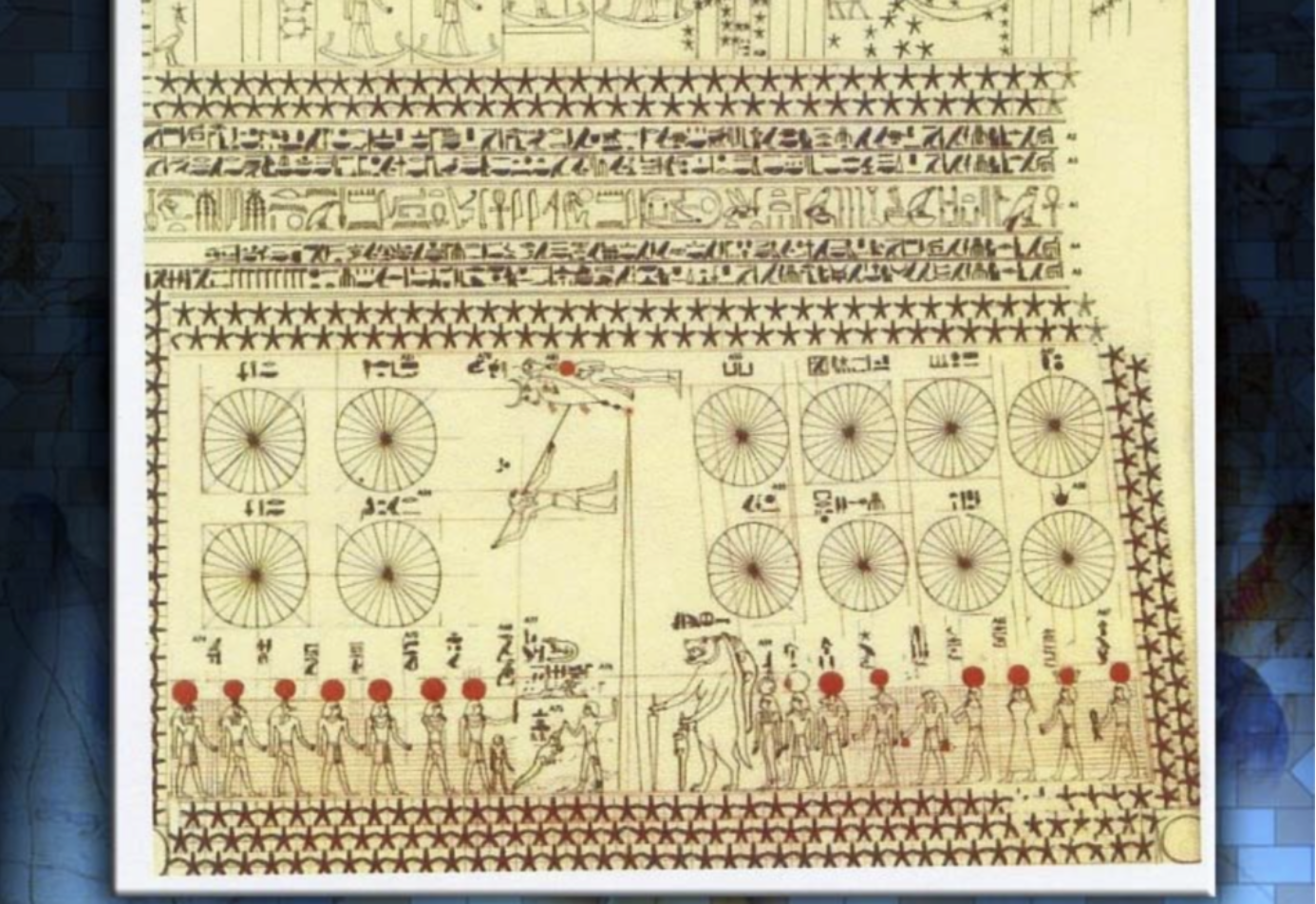 Every time I find myself facing the photo of the fresco of the tomb of Semnut, I can not help but think back to the time spent in order to somehow “understand” it.
In this case I behaved exactly like with the Rosoni: “I knew”, but I did not know.
It is an unbearable sensation, however, a harbinger of continuous “discoveries”, perhaps I should thank my arrogant presumption of knowledge, because it was the spring that forced me, in some way, to “change”.

How many things man must learn about his “supposed” personalities.
Semnut, we said: it is better to talk about the topic of this chapter.
Around 1470 BC the architect of Pharaoh Hatshepsut, the only “Pharaoh” woman of Egyptian history, erected, not finishing it, a tomb for himself, next to his architectural masterpiece, the Temple of Deir el Barhi in West Tebe.
Famous for his alleged history of “love” with the Pharaoh, today he is more known for the fresco that covers the ceiling of the burial chamber, incomplete for reasons that still ignore.
The fresco, measuring 3 × 3.60 meters, in its chromaticity, still existing, is divided into “two” parts.
In one there is the description of the “Deans”, including some famous as Sirius or Orion, while you can see the representations of star clusters like the Iadi, with their characteristic “V” shape, the base of the constellation of Taurus.
To the description, very, but very synthetic, of this part of the ceiling, followed then something, of disconcerting, at least for me.

Two groups of beings, with human and divine features, distinguished by some strange red spheres on their heads, were like in “waiting” below “two” groups of radiused wheels, all subdivided by a sort of terminating “Summit” Pointed.
Looking at this part of the ceiling, I realized that my “Hope” could become a reality. One thousand seven hundred years before Christ, Semnut had his tomb frescoed with those that were the most advanced astronomical knowledge of his Civilization, the beings divided into “two” groups, distinguished by those red spheres (F.62), were planets, already seen in the sky of Nut, or stars, divided by a hypothetical axis pointing towards a particular Taurus, threatened by An, a Falcon god.

The strange Toro represented, then, the north Celestial pole, through the constellation of the Great Bear, around which the remaining “beings” waited to be somehow “disposed” by mythical entities like Hippo (a Hippopotamus erected on two legs with a crocodile on his shoulders). And now finally the spoked wheels that someone, I read, described as a computation of the Lunar Phases.

Observe the photo of the ceiling and simply use common sense, you are seeing “twelve” Wheels with a subdivision already other times described; Four are on the left and Otto on the right, but this subdivision is the same as that of Paul’s Rose, where the “48” teeth represented the Sonic-Precessional motion divided into its “1 / 3-2 / 3” even, in temporal terms , at 8640 and 17280 years.

Each wheel, then, was divided by 24 spokes, exactly as 24 is the sum of the Three Octaves of Collemaggio.
The Egyptians knew in a far more profound way all that until now I had discovered on the “pseudo Precession”, but they said something shocking with that fresco. Decans and Planets belonging, not only to the part of the “precessional” sky, therefore Zodiacal, were arranged according to sonic-precessional areas and proportions, as if all the celestial presences wherever they were arranged, responded to a precise “law”, a law that, first with fear and then with more and more decision I was demonstrating.

If what I thought and the Egyptians described was law in the Universe, even the distances would have been harmoniously synchronized to the vibrational metric of the Labyrinth or the Three Octaves, as you wish, and perhaps Sirius was the most striking demonstration.
Today we know that Sirius is at a distance from our planet, between 8.4 and 8.7 light years, but considering the speed of light of almost 300,000 km. at the second, in 24 (Three Eighth) hours it simulates a precessional distance equal to 25.920.000.000 Km.

This perhaps meant that the distances, in Light Years, had as basis the “law” hypothesized by me and therefore Sirio was, exactly at 8.64 light years from the Earth, equal to 1/3, in light years, of the ” “vibrational” law
I was certainly exaggerating, all this was not possible, I repeated it continuously, but I could not convince myself. Those famous waiting characters could also be “only” divine authority and therefore those Wheels, which were surely “Sonics”, had a different meaning.

I could in any case prove that the Egyptians knew the theme of my “hunting” for more than 4000 years and, perhaps, it was enough for me. Each Wheel according to my interpretation, represented 2160 years divided into 24 portions for 90 years each, for a total of 25920 years and, what is truly exceptional, the total number of rays was equal to “288”, which brought my city back, with its religious recurrence, once again in the limelight of the millennial timeless science pursued by me.

Another consideration: Eight wheels were equal to 192 rays and 192 letters were the genetic sum of the 64 words obtained from the DNA through the RNA, the Egyptians were perhaps aware of our genetic heritage, since they divided the eye of Horus in 1 / 64.
Not only that, the Eye of Horus, if added in its fractions did not give the numerical unit, but a new fraction equal to 1 \ 98mo, I discovered that by applying the constant 2 \ 3 to this numerical result we obtained the basic reference of “288”, but to speculate. I would therefore like to carefully read the numerical table and its comments on the Eye of Horus.

And the remaining four wheels equal to 96 spokes, perhaps represented half of the part of maternal or paternal origin, equal to 32 words?

Were not these genetic relationships presented by the American writer at the base of human creation?
Semnut had dissolved all my logical brakes, I could no longer distinguish in what kind of reality I had lived so far, but everything was really exciting, without moving from L’Aquila I was traveling in time and space, pursuing my logic dictated by a personality, perhaps presumptuous, but extremely sure of himself.

It was as if, in other lives, I had left those traces and now I was finally collecting them to summarize them in what? A phantom “Law”, so far escaped from the official science that made the Universe not so far from the human being, just as the “Light” wants us to believe, but above all structured according to a single vibrational project, numerically present in a fractal way to all the levels of Creation, from the genetic to the Astronomical one. I thought about the fact that, if this were true, the hypothetical beings, living in other parts of our immense Universe, could not be so different from man, or at least their diversity had to be only constituted by their type and level of development mental and scientific. A last numerical analysis, performed on the beings we say so, “gifted” of cosmic egg on their head, also allowed me to go back to the metric of the “Labyrinth”, even exceeding it in terms of numerical results, for which I attach a table to part, Semnut was nothing but a Symbolic-Numeric code of the Law, Sonic, truly fantastic.