CARTESIO AND THE DIVINE MATRIX OF THE PROTO-SCIENCE

CARTESIO AND THE DIVINE MATRIX OF THE PROTO-SCIENCE 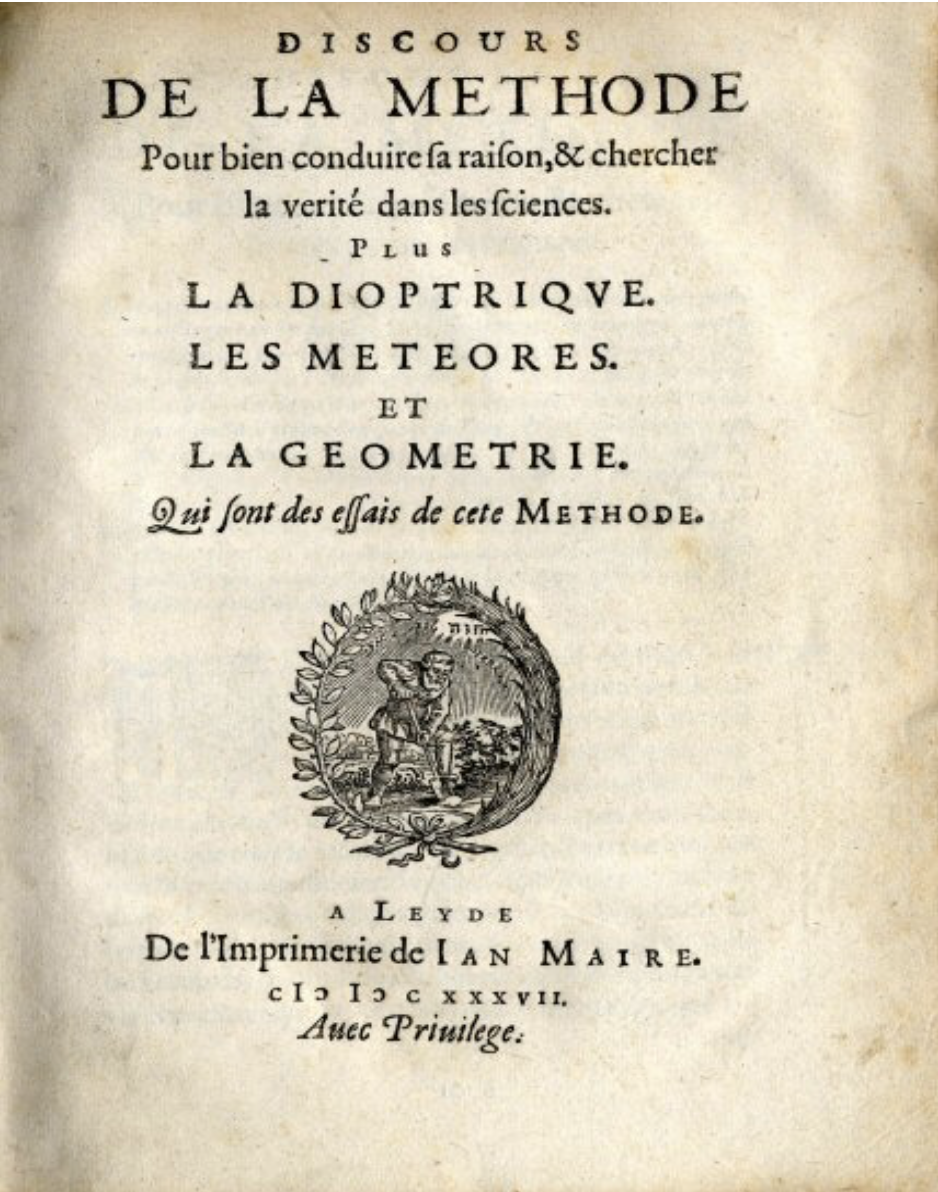 The problem of my studies lies in their limit, so far never found.
The example of Descartes I think is clear and falls well.
In fact, in presenting a “his” article to a serious journal such as Science and Knowledge, I felt respond – as often happens – that, although interesting, is not considered very relevant to the magazine’s target, which, for those who do not they know it, they deal with many scientific aspects “on the border”, not forgetting the holistic aspect of the subjects dealt with.
But my studies and my conclusions go “beyond”.
These are the usual misunderstandings that the OCTAVA creates for me.

But, given that I do not give up easily, imagining a hypothetical interview, I asked myself the following question: “Is it possible to approach the Holistic world an exponent of what has become an official science?
Or rather: What do science and holism have in common?

Well to answer this question, I will make use of examples, I would say practical and rather heterogeneous, to which I will follow some suggestions drawn from my research on the French genius.
I will then resort to simple analogies, to demonstrate how the two worlds can somehow begin to merge, into a new scientific-spiritual solution, having as its basis a cognitive structure with dimensional characteristics.

But let’s leave the big words and go to practice, keeping in mind that I am a symbolist, therefore a being belonging to a small circle of people with a rather particular gene, which, I assure you, is not always an advantage.

Now, since I have recently dealt with the matrix of Eastern Thin Anatomies, to begin to approach Descartes I will use the: 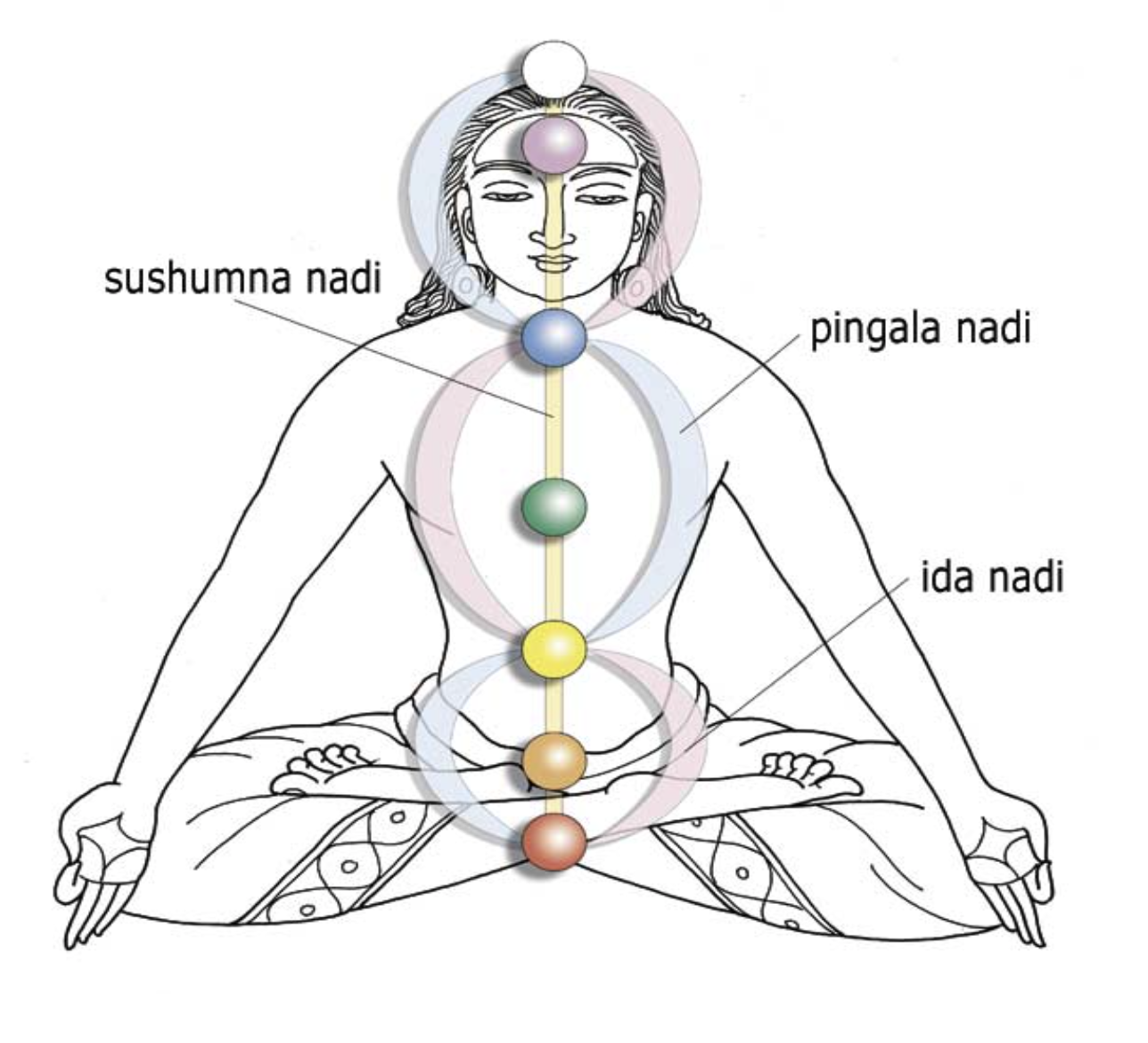 Essentially, those involved in yoga assume that the human body is made up of: 72000 Nadi or channels, within which flows a type of energy called Prana.
This energy is “filtered” by 7 chakras.

The Prana, in turn, is divided into 4 energy levels, which use the 3 main Nadi to scroll, as shown in the image.
I do not want to add anything else, but I suggest you fix your attention on the interval through which, Prana and Nadi, relate (4 \ 3).

Let’s move briefly to the following example: Ikebana, the oriental art of creating floral structures and not only, able to inspire the sense of “perfection” placed in the creation.
The oldest technique of Ikebana, which over the millennia has evolved through different styles, is called: Rikka.
It foresees that the compositions respect, always and absolutely, a numerical structure according to which the parts used, be they flowers, branches, leaves, etc., are arranged:
– at the top, according to an interval 3 \ 4 e
– at the bottom, following an interval equal to 2 \ 3.
In other words: if 4 flowers are assembled at the top of the composition, 3 branches must correspond to them and, in the bottom of the composition, the chosen leaves or shrubs must be intertwined in 3 groups of 2 or vice versa.
In this case, a second equal to 2 \ 3 will be added to the previous interval 3 \ 4. 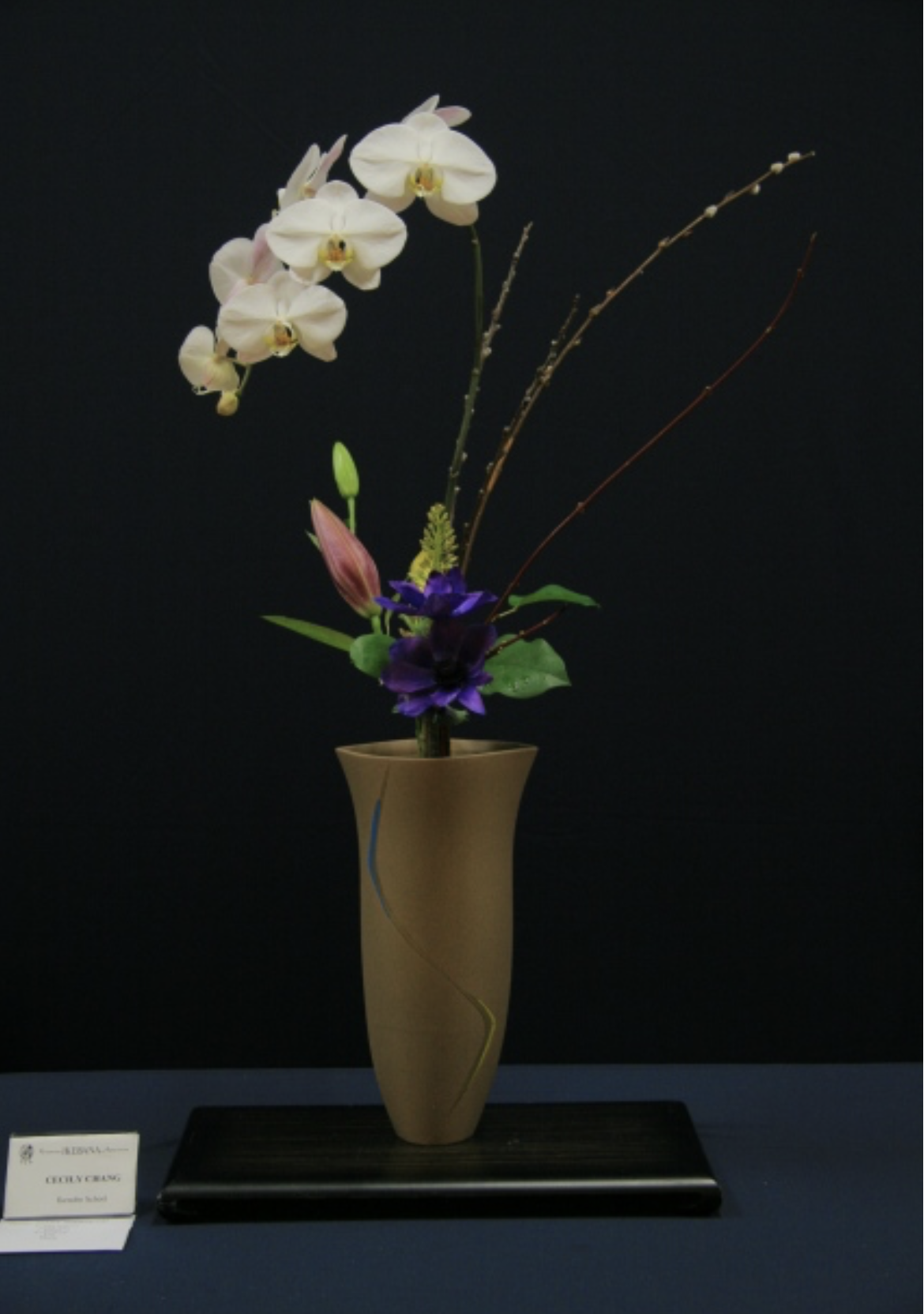 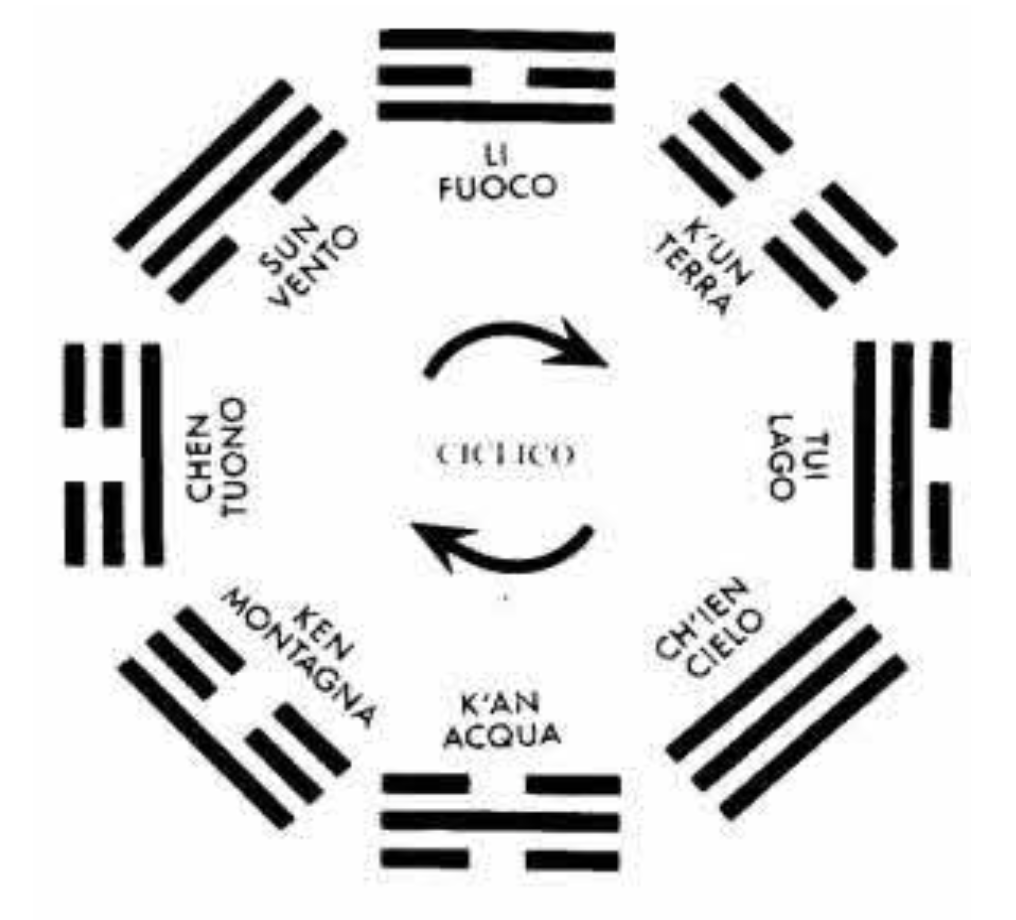 Now let’s move on to I-Ching

Technically, the I-Ching uses, to access the divination, 3 coins, which are launched 6 times. On their 2 faces they show, respectively, a numerical value equal to 2 and 3.
In summary we will then have:
2 – 2 \ 3

Many other “oriental” examples could be added, but since the goal is Descartes, I have to be more concise

So we return to the West to examine the Upper Room carefully.

From the examination of the painting we can see that the Apostles are divided into:
4 groups of 3 and, on the sides of Christ in 2 groups of 3 Apostles on each side.
Consequently, through the work of Leonardo it is possible to deduce the close numerical relationship existing between the two intervals.
In summary we have: 2 x 2 \ 3 = 4 \ 3 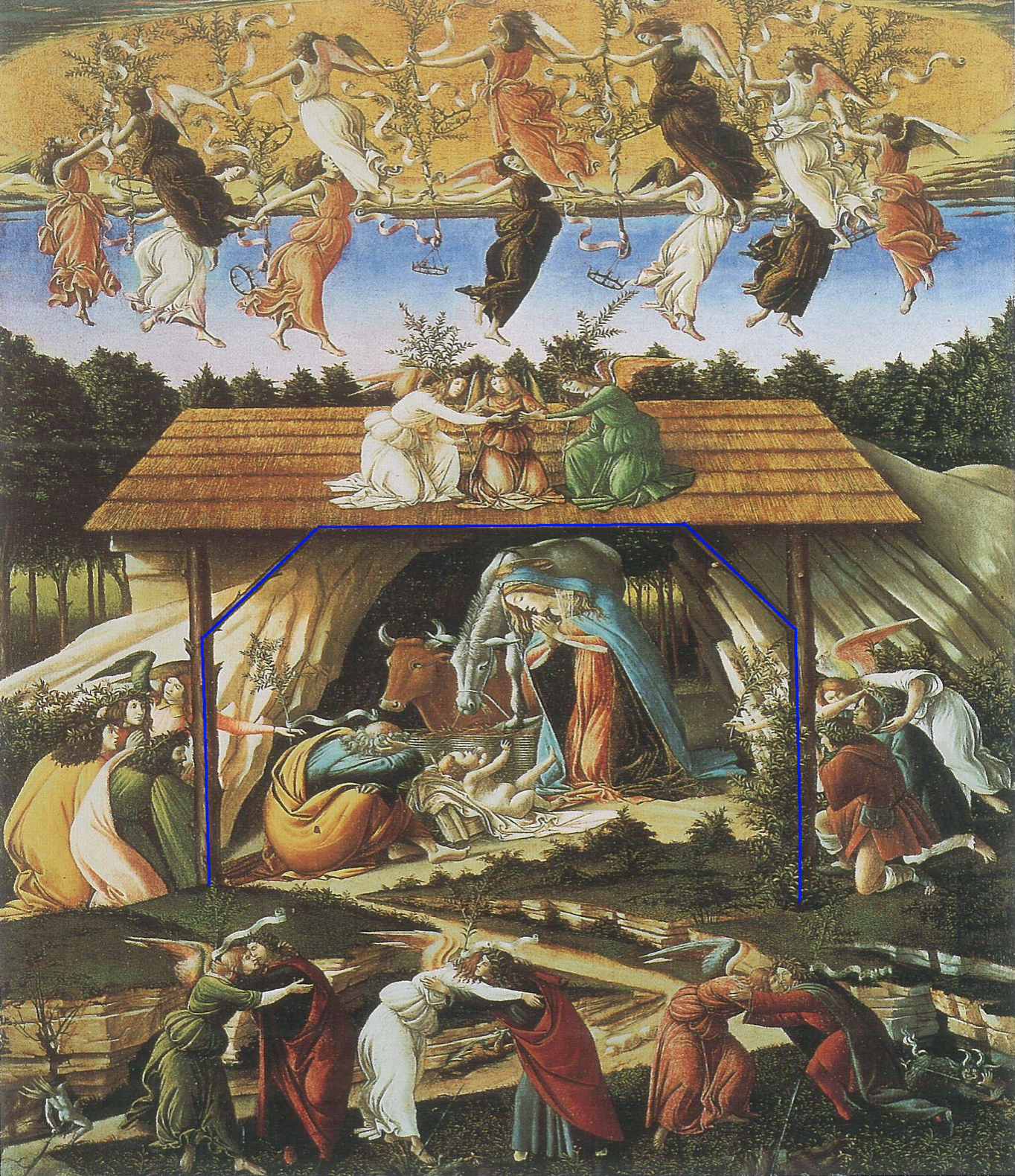 Now let’s move on to Botticelli and his Mystic Nativity.

Today preserved in the Uffizi Gallery, it depicts:
– in the upper part 12 Angels divided, through the colors of their garments, into 3 groups of 4 e
– in the lower part 3 groups of 2 beings.

So the same Ikebana matrix is also found in Botticelli’s work.

It is now the turn of Dante Alighieri and the structure of his Divine Comedy.
The Supreme divided his work into 3 groups consisting of 33 cantiche each, but in Hell he added a preface, so as to turn it into 34 cantiche.
Consequently, the final structure of the Groups consists of two essential intervals: the 3 \ 4 and the 2 times, 2 times 3 (33).
Therefore: 2- 2 \ 3 – 3 \ 4.

Now let’s move to the Palladio reporting directly from Wikipedia:
……. In the four books of architecture, he refers to referring to the diameter of the column of a building as a reference unit of measurement (called the module ) to proportion all the other constructional and stylistic elements of the building. For example, the thickness of a tuscanic beam could be dimensioned as 3/4 of the diameter of the column …………
Again: 3 \ 4

I could go on indefinitely, pointing out that certain intervals – which only for dialectical comfort I have defined such – in a heterogeneous way appear both in the Eastern and Western world, infiltrating respectively, both in what we call subtle (therefore unofficial) , which on an official level, lapping activities such as painting, writing and architecture.

But now I need a symbol that acts as a link between these two worlds, before moving on to Descartes.
I will use the Zodiac of Dendera.

It depicts 12 Beings arranged according to EIGHT directions, which, with their 24 arms (36 parts), surround 72 celestial bodies belonging to our galaxy.
These Beings are divided into two male groups (Neter) and a female group, of 4 elements, then in 3 groups of 4 .
We therefore observe the use of a binary relationship that connects the internal part (constellations) and the external part (Esseri) that encloses and supports it.
So the Egyptians, incredible as it may seem, in Dendera postulate 2 worlds:
– Three-dimensional, visible.
– Dimensional, invisible.

Therefore, we are facing a structure that we could define as “CAMPO” and in the “thin” part of the field, there are the intervals so far encountered.

Therefore, taking into account the clear numerical correlation between the two parts (internal and external), accepting one comes spontaneously accepting the other, even if invisible and, if my hypothesis is correct, the discovered physical laws must necessarily contain to their internal such dimensional staples.
If this has happened, there has never been any difference between the holistic world and official science.

In my opinion this osmosis took place around 1600, when the Proto-Science was born and a magnificent example in this sense, we were left by Kepler.
With him the official astronomy is born and through the Third of its Orbital laws, today we know that:

“The squares of the periods of revolution of the planets are proportional to the cubes of the main axle shafts of their orbits.”

So: 2 celestial bodies have a space-time relationship that is based numerically on the 2 (Square) and on the 3 (cube)
In summary the law is as follows: 2-2 \ 3

Finally, thanks to Kepler, I can talk about Descartes, who knew very well the works of the German astronomer. that had been reported to him by one of his great Dutch friends, Isaac Beeckman, whom he met in Breda in 1618.
Beeckman, a graduate in medicine and a worthy scholar, was the one who reawakened his passion for science in Descartes, destined to be inextricably linked to his … philosophy.
For years, the two of them discussed themes such as: acceleration in the fall of the serious, proportional medi- ums, the musical consonance, to which the optics, atmospheric phenomena, the laws of motion, etc., etc. were added.

Themes that Descartes faced thanks also to the minimal friar Marin Mesenne.

What follows is a compendium of his solutions to these problems.
Solutions often become …… .science.

Question of Beeckman:
“Assuming that the motion is conserved and that the space above the earth’s surface is empty, what distance will it travel in an hour when a stone falls, being known the distance traveled in two?”

Therefore:
If you represent the distance along which a body falls in time, as T1, according to the analysis of Descartes, the time T2, necessary for a body to fall for a distance of 2x, is equal to 4 \ 3 of T1

In 1628 he was asked to:
“Determine the length of a pendulum, whose oscillation period was equal to half the period of a pendulum with a known length”

Answer:
“Once I had made the following calculation: if with a one meter long rope the weight takes a moment to go from G to H, when the rope is 2 meters long, it will take 4/3 of a moment. ……

In 1618, Descartes deals with Medi Proporzionali.
The Proportional Mediums are directly related to the millenarian problem of the duplication (2) of the cube (3). The duplication of the cube is directly connected to the infinitesimal calculus and algebraically obtained, since the time of the Greeks, establishing 2 proportional averages.
Numerically we have therefore: 2 – 2 \ 3

Essentially it consists of 2 rules that mechanically act on 2 sets of 3 triangles. 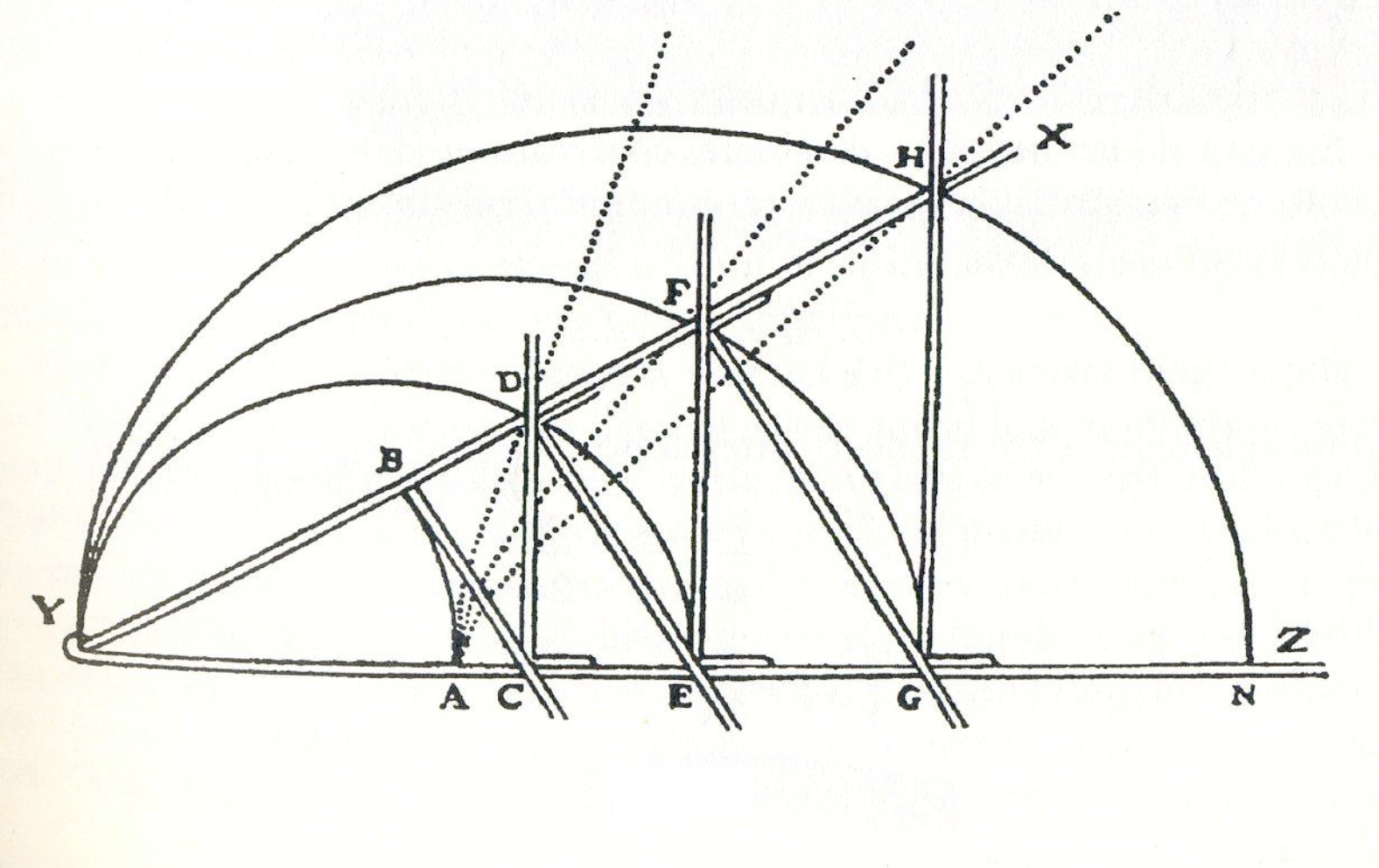 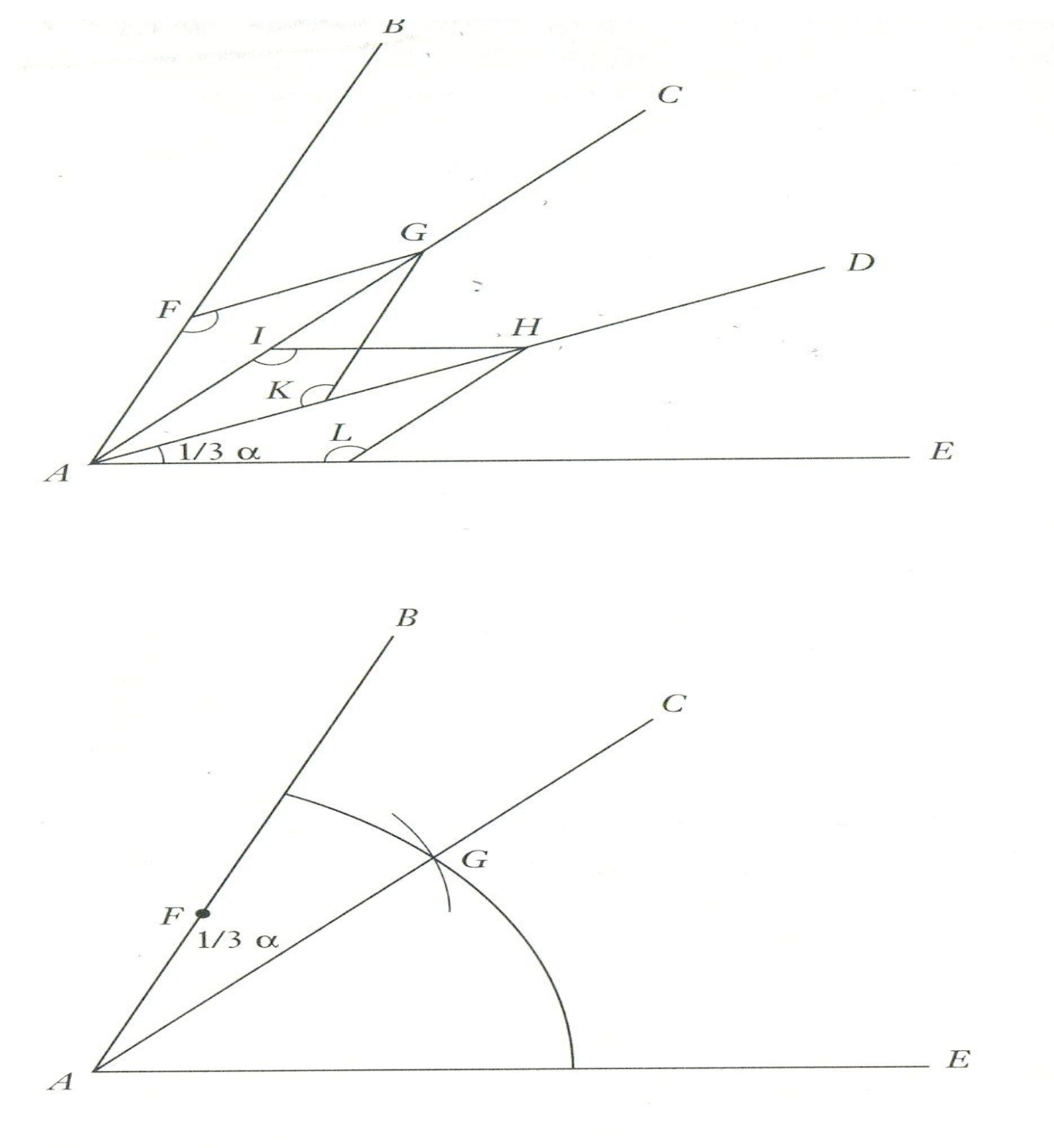 A short time later he transformed the same compass, in such a way as to be able to solve the equally millennial problem of the Trisection of the corner, also connected to the mathematical infinity.

With 4 rulers he created 3 angular spaces, which were subdivided in the same way, by the mechanical interplay of 4 triangles.
Simply the device was built by repeating:
4 \ 3, 2 times

Subsequently he invented the Cartesian Axes using 2 lines, which, intersecting each other, delimit 4 angles of 90 degrees.
Angles belonging to as many rectangular triangles.

In summary we have: 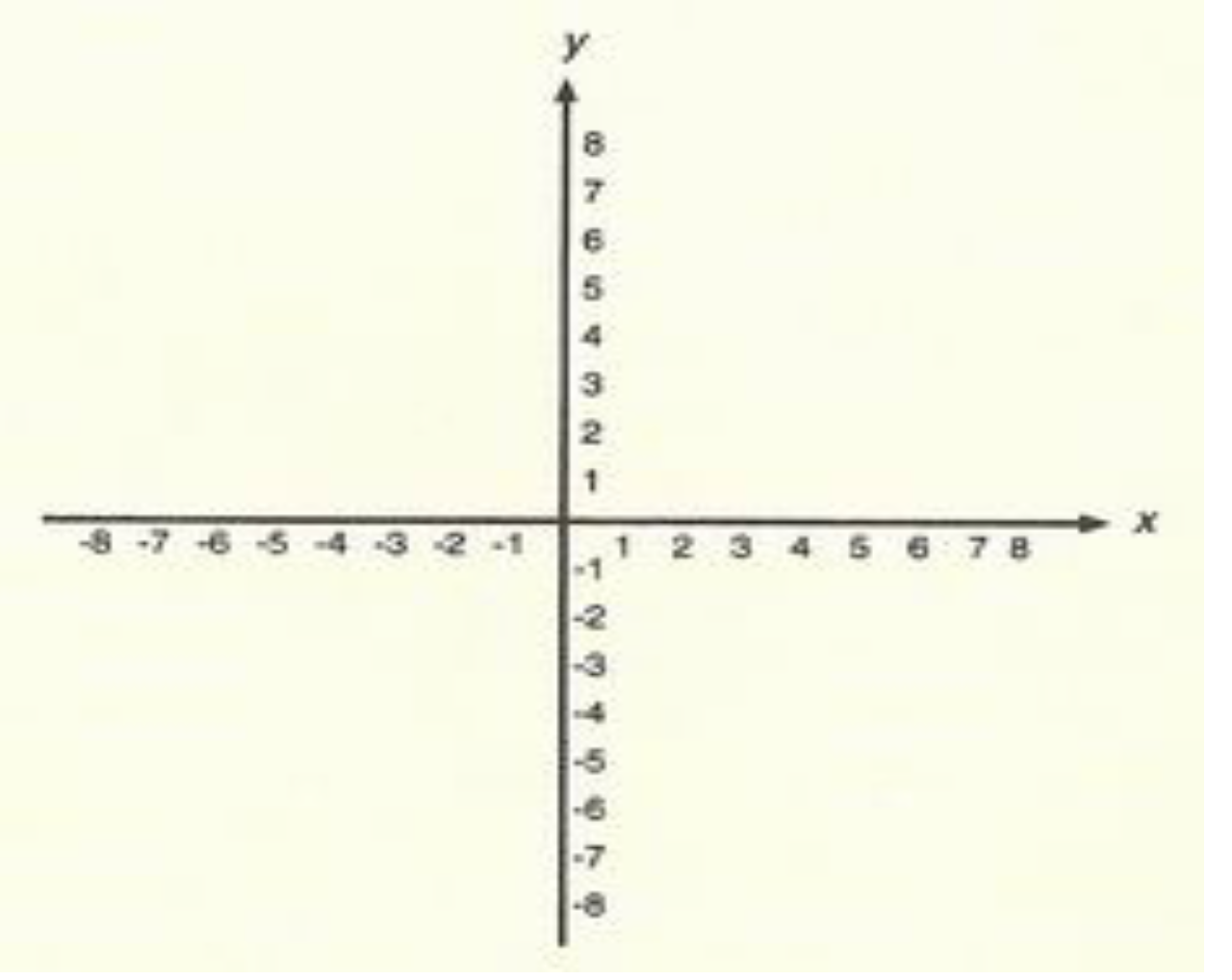 And again he codifies the angular constant air-water and unveils the chromatic mechanisms at the base of a physical phenomenon like the Rainbow.
This constant is equal to 4 \ 3
Therefore: 2 – 4 \ 3 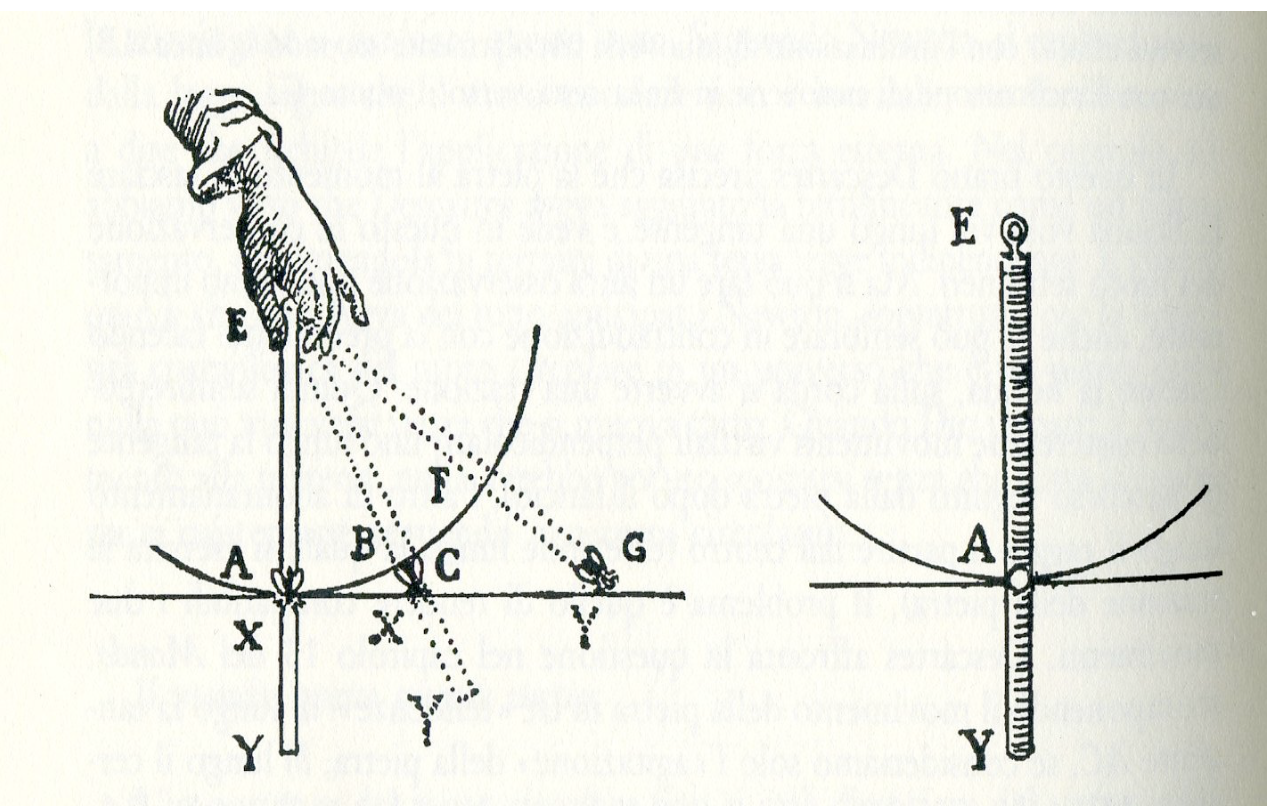 Taking care of the circular motion of a slingshot, which according to him is composed of a series of rectilinear movements, he states that these movements develop as follows:
1) along the tangent AC, if we consider only the agitation of the stone,
2) along the circle AF, if we consider it attached to the rope,
3) along the radius DA, if we consider that part of its agitation that is prevented by the rope. 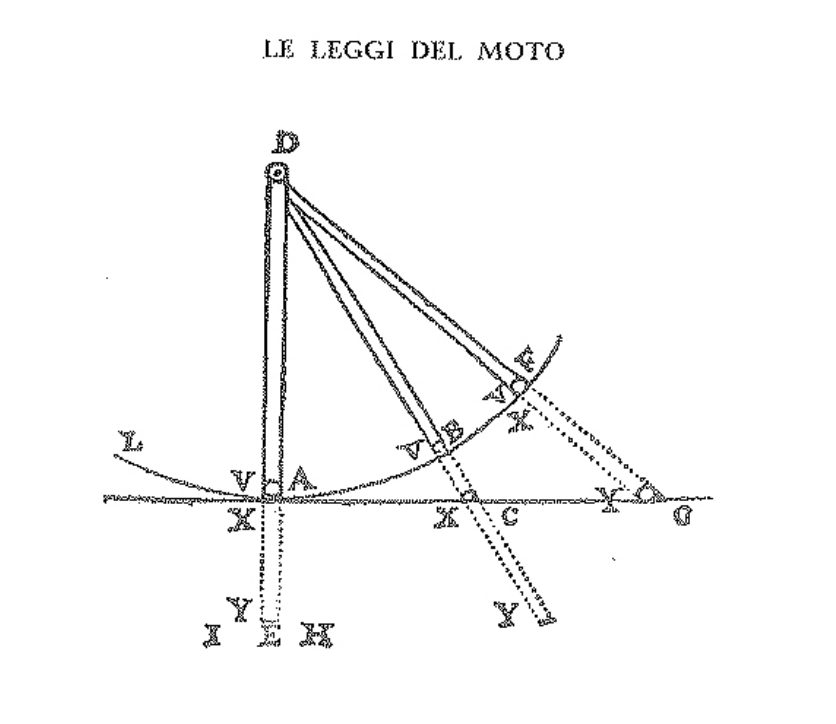 The aforementioned movements then adds 2 “trends”:

1. a long the circle (VXY)
2. the other radial from the center to the outside (DVXY).

Therefore the circular motion is composed of a ratio of forces equal to:

Moreover, he will keep secret and never publish a spatial law, rediscovered later by the great Euler, today known as the “Topological of Euler – Descartes” law.
It compares the 3 main characteristics of the 5 platonic solids to obtain the constant 2:

Finally I would like to add as Descartes defined God:

It is sufficient to add 4 rectangle corners belonging to as many triangles to obtain:

At this point all that remains is to unite all the results, to understand how they are connected to these intervals.
All this would bring us back to the Cenacle, to Dendera, to Botticelli’s work or to Ikebana, but since I hypothesized that these intervals are of Dimensional matrix, I would like to add further proof regarding the numerical structures that contain them (8- 12-24).
In fact, they have re-appeared in Physics for some time, at the base of the famous Modular Equations on which today the Membrane Theory is based, until recently, known as String Theory. 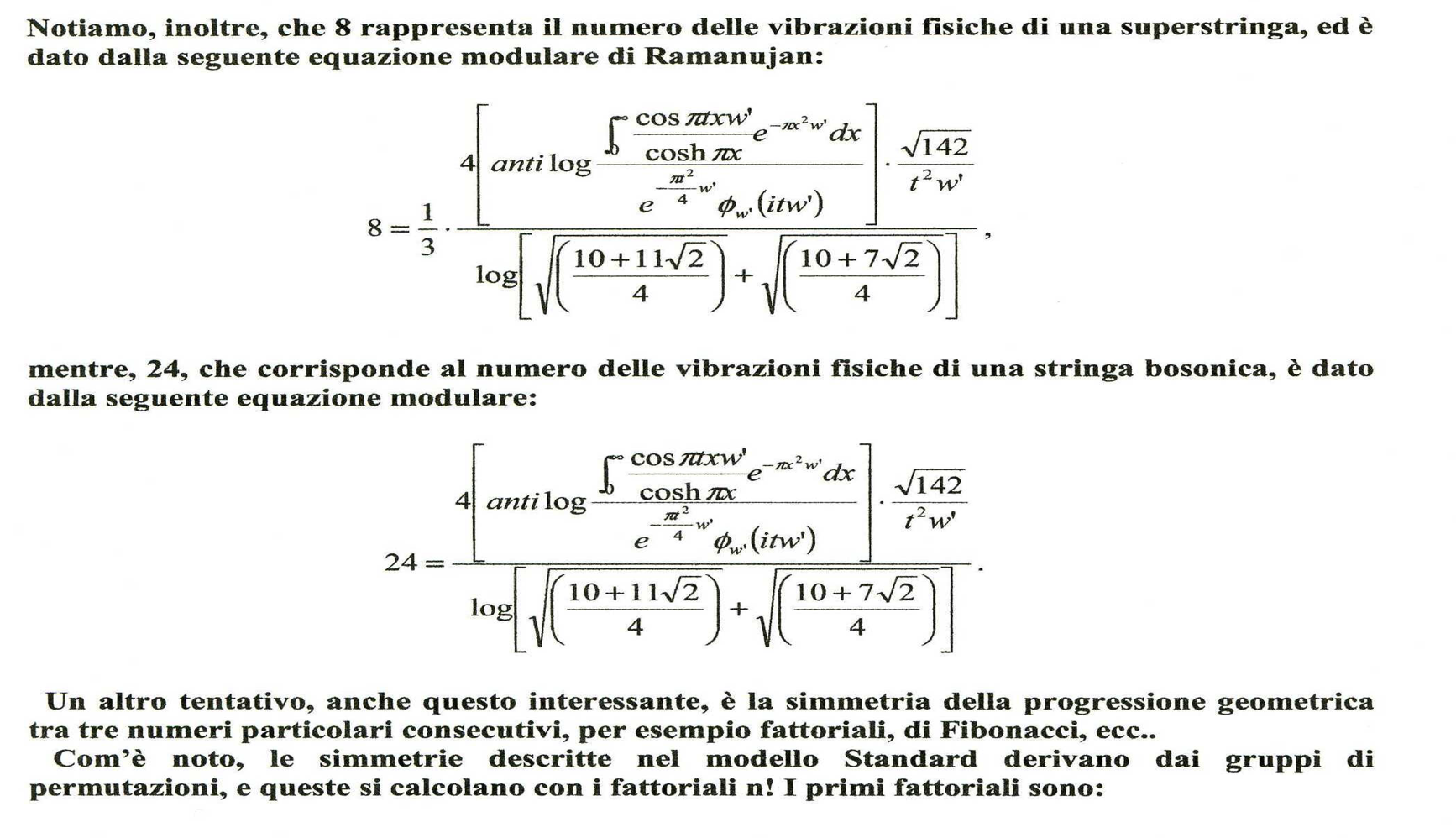 If I wish to conclude, I would say that the distance between the Holistic-Thin and the official Science would not substantially exist if we recognized the millenary paternity of the first, in what I have defined as knowing the Octave.

Descartes was one of the most illustrious exponents.

It would be sufficient to study “his” God more carefully, to understand what error we have committed in the extruding of it, but above all in believing that God has not been ethically and physically the matrix of science.